Posted on August 10, 2013 by Satellite Gallery | Leave a comment 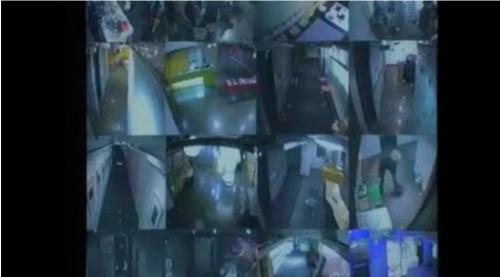 Here is an artist who is digging the frontier of new media/performance-based art using surveillance cameras. South Korean artist Yangachi, whose pseudonym in Korean means a ‘jerk’, produced 007: Surveillance Opera (2008) using CCTV cameras that are ubiquitously installed in everyday places, a phenomenon that is becoming more and more systematic and obsessive. Yangachi manages to hijack these security cameras that are meant to continuously survey citizens, and he uses them as the channel to broadcast and record his recreation of a scene from the famous 007 movies. In the short reenactment, nine actors roam through the surveyed area in a shopping mall where they engage in a violent drama to claim the bond girl. The performance is live-fed to an audience who watched the control panel projection in a very similar way as one would watch television shows or movies. Once finished, the performance is presented as a video work. A violent game to claim an attractive woman is a ubiquitous theme in popular culture. The artist only chooses the famous Hollywood films in order to use to drive the performance. Using a familiar visual scene refreshes our perspective on the surveillance camera system, and that is where Yangachi’s work is rooted. 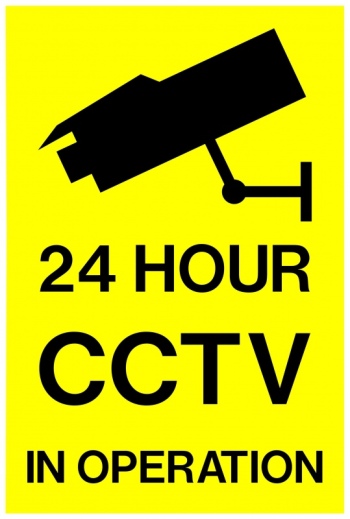 Unlike our exposure to Hollywood images, the surveillance camera system stays behind closed doors. It belongs to authority. In Yangachi’s work, he presents the control-panel view of the surveillance cameras, and we experience a view that is usually inaccessible. We get to become the security guards. But we are also passive spectators who watch the very transgressions which surveillance cameras exist to control, violence and abnormal behavior within regulated premises. Any signage that says “CCTV in Operation” is a warning, and whether or not there really is an operating camera, it instills a sense of being observed, and has automatic power to control people’s behavior. Our unconscious awareness of the presence of these cameras affects how we occupy public space. Yangachi transgresses the expectations of good behavior that CCTVs demand and instigate. In this video there are moments when an actor looks directly into the surveillance camera and makes a nasty face after he has made a racket in the hallway or just killed someone. They act with a full awareness of the surveillance. They engage with the security cameras as they would with movie cameras. The work inverts the security camera’s function from nonfiction and documentation to fiction and entertainment. So it undermines the surveillance system as it downplays on its function, as a slight mockery on the whole system. 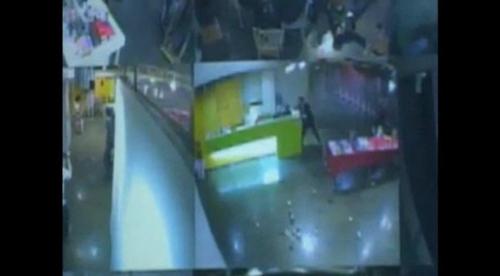 As citizens we hold an ambiguous relationship with the obsessive and systematic surveillance as willing participants (for our own security) and victims (as subjects of relentless observation). Yangachi is fully aware of this relationship, and highlights this tension. The work simultaneously presents the vantage point of the observer and observed, as it has a dual function of serving as a security camera and movie camera. Viewers engage in a highly voyeuristic act even though it looks as though they have more agency by gaining access to the recordings on the surveillance cameras, thus the fraught tension between the two vantage points is never resolved.

The artist says he uses fiction as a tool to navigate the world. How has the 007 performance transformed our ways of perceiving and navigating the world? How do we negotiate our way of occupying public spaces? The artist presents us with some questions we need to think about as we inhabit the cultural and social spaces of regulation and surveillance, and pushes us to define our own position.