Seen as It Was Conceived: Or Gallery’s “The Unspeakable Compromise of the Portable Work”

The blog for Or Gallery’s current off-site exhibition The Unspeakable Compromise of the Portable Work features a post by artist Igor Santizo, wherein a black spot is placed over top of several images. This transposition onto a space radically alters how it is perceived. As I Enter office 202 at 3540 West 41st, the space of the exhibition, I receive a similar impression. 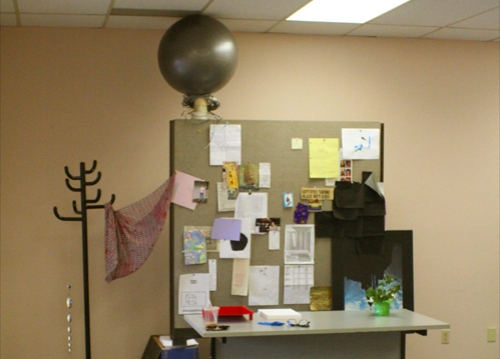 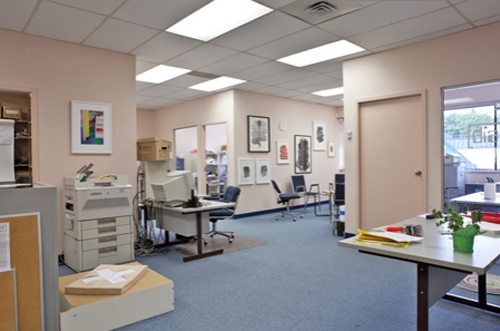 A felt board stands by the wall near the doorway, covered in miscellaneous office ephemera, an exercise ball, and an upside-down inspirational print. This installation, Study for an Essay: How Deep is Your Disaster II, by Jen Weih, is one of many pieces in the space that confound the understood notion of a place of work. Drawing inspiration from artist Daniel Buren’s essay The Function of the Studio, the space does much to narrow and blur the gap between the place of art’s production and its reception by transforming an office and its contents into a studio and exhibition space (and vice-versa, the exhibition’s curator finds herself answering phones for the space’s host, Dialog Medical Systems).

Even the office’s printer/storage room has been transformed, converted into an ASCII portraiture studio (a popular venue in malls of the eighties). “The stuff is here so why not use it,” says curator Barb Choit of the equipment in the office. I ask her if she can take my portrait. She says of course, it’s by donation. I reply that a write-up for Satellite’s blog will have to suffice; I don’t have any cash on me.

It’s unusual being seated to get my photograph taken. A dot-matrix printer whirrs beside me and memories of grade school come flooding back. I get tense. “Don’t look so terrified,” says Choit, gesturing with her left hand, “smile at the birdie.”

Two weeks later I return to retrieve the print. I roll up the portrait but I don’t have a rubber band. I see one, but it’s lying on a table that’s part of Weih’s installation. I ask Choit if she has a rubber band. She looks around the room, then at Weih’s table, “there’s one.” “Oh,” I reply, “I thought that was…” “No,” says Choit, “my Dad just leaves stuff there.” Looks like I’m not the only one unable to disentangle the studio from the office.

The Unspeakable Compromise of the Portable Work runs until Aug 20 on Saturdays or by appointment. The closing reception will feature a multimedia lecture by Andrea Merkx and a performance by Ice Machine and Swift. For details, visit the Or Gallery website. Photo credit: Sean Nelson unless noted.

3 responses to “Seen as It Was Conceived: Or Gallery’s “The Unspeakable Compromise of the Portable Work””